Barry McManus joined the Militia in 1938 and left Australia on February 4th, 1941 on board the Queen Mary bound for Malaya.Barry became a prisoner of war in February 1942 and spent six months in the Changi prison camp before being sent to Thailand to work on the infamous Thai-Burma railway, which was completed in 1944. The last twelve months of the war he spent working in the copper mines on the island of Shijoku, just off Japan.

Barry’s fortitude and courage enabled him to survive the horrendous hell camps in which he was imprisoned for nearly four years.

Barry married Ada in 1946, moving to Engadine in 1948. Working as a roof tiler and bricklayer until his war injuries forced an early retirement.

As the population of Engadine grew, Barry and Ada realised there was a real need for something to be done to give boys an opportunity to participate in playing sport and so began the formation of the Engadine Dragons.

Barry was the Club’s President for both Cricket and Rugby League from 1959 to 1963 and was duly honoured with life membership by both clubs.

In 1960 to 1962 he was Secretary of the Boys Committee for the Sutherland Shire division of the St. George Junior Rugby League and also delegate to the St. George Junior Rugby League. Then, in 1963, the Cronulla-Sutherland Junior League and the Sharks grade club were formed with Barry as Secretary of the Sharks 2nd division team in their formation year. The Cronulla-Sutherland Junior League rewarded his services with life membership.

Barry was also a committeeman with the Sutherland Shire Junior Cricket Association from 1960-1963 and he also coached Representative teams besides coaching our Club sides with his wife Ada doing the scoring.

Barry was also involved with the RSL movement in which he served with great distinction for countless years. Some of his achievements were:

Barry was also deeply involved with the welfare and legacy functions of the RSL movement.

History of Rugby League in Engadine

Rugby League is the oldest code of football played in the Engadine area.

The following is quoted from J. E. Thompson’s Engadine History booklet: “The Engadine Junior Rugby League Football Club, which commenced last year (1955) this year took part in the St. George District Competition. The lads are all keen, and the Club should develop well. Their colours are black and gold, and term themselves “The Tigers”. The previous R.L. club formed in the 1930’s played in red and green colours. They did not take part in District competition matches, but rather Inter-District matches. There are many memories of the times Engadine met Heathcote on the Heathcote Playing Field”.

Between the original Rugby League teams in the ’30s and the formation of Engadine United in 1954, the Engadine “Rainbows” kept R.L. to the forefront in the area with regular social matches.

“The “Rainbows” was a name tagged on the side as the team played in a multitude of coloured jerseys. Matches were played against factory teams and against the Heathcote boys. Well-known local identify Ken Beames organised many of these matches.

Engadine United formed in 1954 played social matches that year and the following year entered the competition proper. A new committee was formed in 1955 with John Cooper as President, Denis Thompson as Secretary, and Lance Bartlett as Treasurer. A, B and E grade sides were entered in the competition as Engadine’s representatives. Being short of experienced A grade players the Engadine officials secured the services of ex-St.George grade players “Ossie” Mullins, Harry Williams and Keith West. These players together with local boys Col Keenan, Kevin Macken, Norm McKenzie and John Edmonds made up the nucleus of the team.

Doug de Witt, Alan Jackson, Eddie, Ron and John Burke and Gordon Morrison were just a few of the local boys who represented the Tigers during the formation.

The first year Engadine won only one match as the competition was very strong. The next season, further St. George players in Ron Corps and Ken Laver played, however, the team had not much more success. It was decided at the end of that season to buy a captain-coach, as other teams in the competition had done this with great success.

The decision to buy a captain-coach resulted in New Zealand player Bill Woolsey being purchased for the season on a fee of £100, two other Kiwis in Ton Bakalich and Jim Miller were also paid to play on a fee of £50 each for the season. Engadine broached the International poaching ban of that time in securing these players and was the first club in Australia to do so. George Crawford, top Daily Telegraph R.L. reporter at that time, in his column “In Touch” devoted his whole article to the Engadine move in securing these players.

23 competition points were gained that year from 10 wins and 2 byes, but the Tigers were unlucky and missed the final four by one point. Coming from the bottom of the competition table to 5th was a very good effort as their were 12 teams playing in the A grade that year.

Many other Kiwis followed their mates over and in the end Engadine was overrun with the New Zealanders.

At this stage Mason’s Fowl Shed was purchased for the premises of the Engadine Leagues club with the view of obtaining liquor and poker machine licences, etc. Many improvements were made to the structure. These expenses coupled with payment of players, as well as all the teams wanting payment for time off work and match payments saw the death of the Club. These premises are now the Engadine Bowling and Recreation Club Ltd.

The Tigers were now in debt, and President John Cooper, Secretary Ray Graham and Treasurer George Beams had to face some very embarrassing moments.

The Tigers were eventually wound up and soon after the Saturday morning competition came into being and with it the birth of the “Dragons” which was formed mainly through the efforts of Barry and Ada McManus, to give the boys of Engadine an opportunity of playing competition sport.

(See note at end of page)

NATIONAL UNDER 20’s COMPETITION
This competition was commenced by the National Rugby League in 2008 and
followed the national 1st Grade competition.
It ceased in 2017.

MAL MENINGA CUP
This competition was formed by the Super League in 1997 (for that year only) and
was for under 19’s.

TERRY LAMB CUP
This competition was formed by the Super League in 1997 (for that year only) and
was for under 17’s. 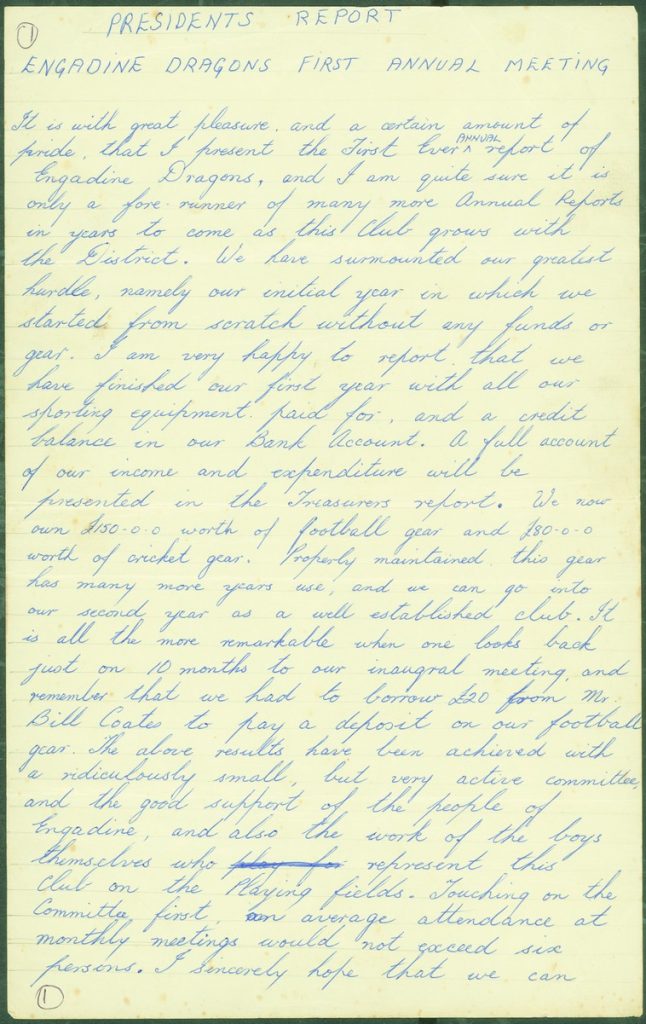 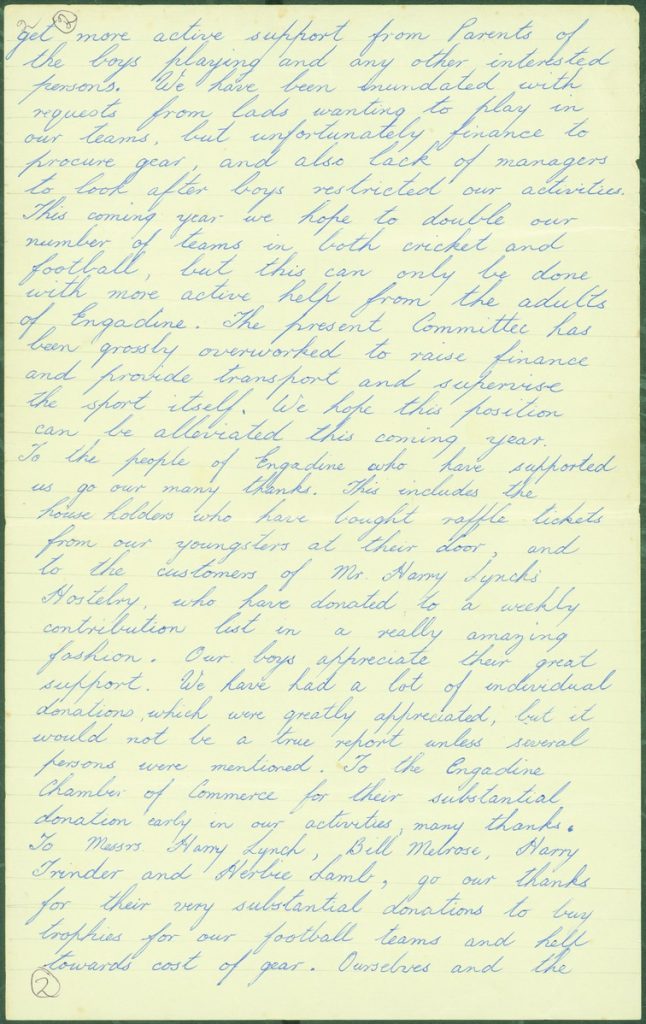 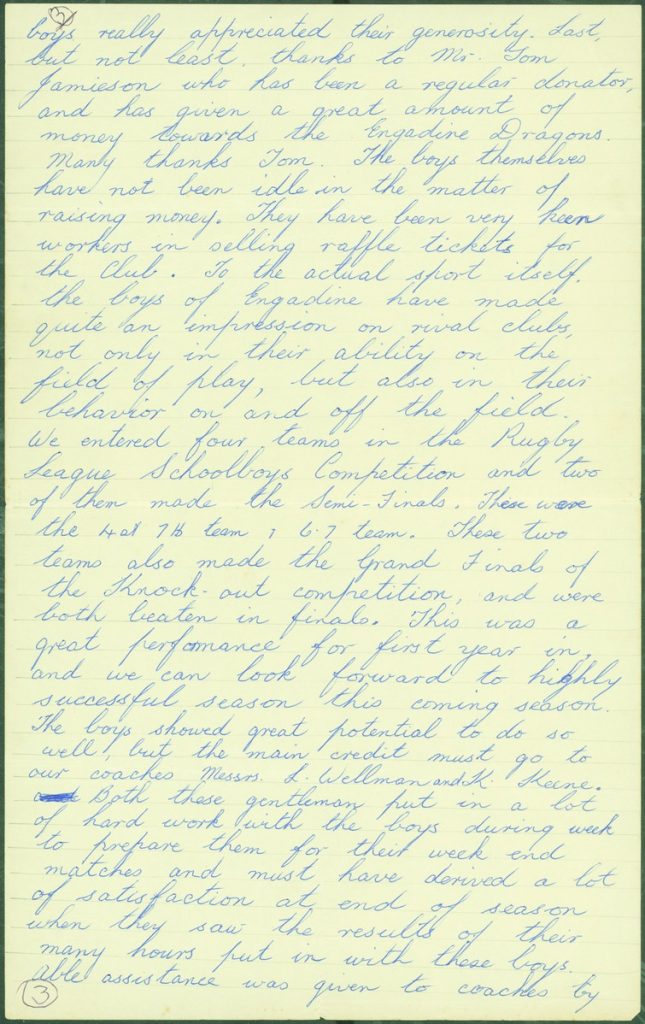 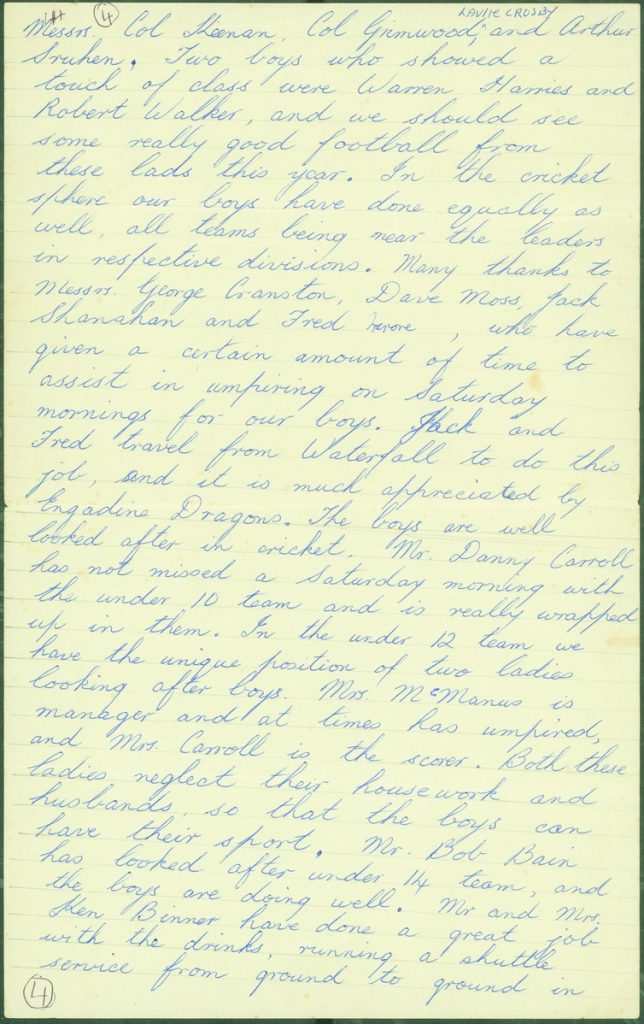 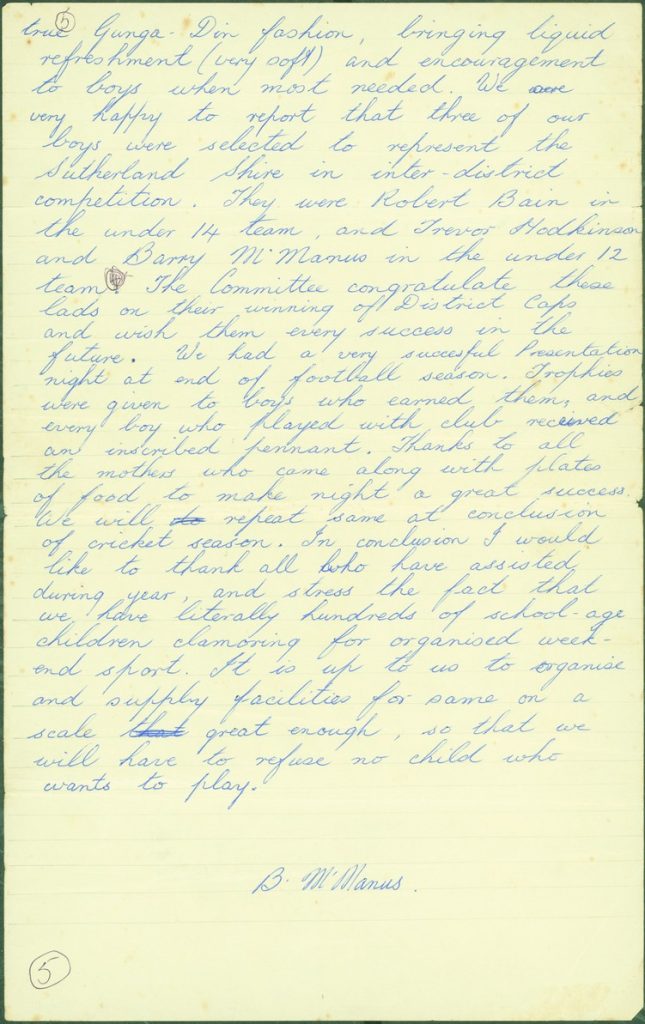 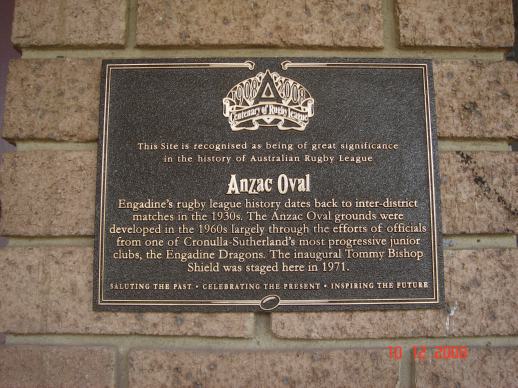 Due to cancellation of most of the season due to Covid-19,  no awards were given for this season.

*   The 17Gold Team played as a combined Engadine Dragons/Como-Jannali

(Due to the COVID-19 Virus, only two awards were given for each team)

*    The 16Gold played as a combined Engadine Dragons/Como-Jannali

Not all records are available for this year.

Not all records are available for this year

Not all records are available